The documentary, which premiered Jan 30th at Sundance 2021, is an 81-minute glimpse of New Yorkers from all walks of life looking for love during the pandemic. Director Pacho Velez calls the subjects of his film searchers (hence the name, duh) and he pulled from over 75 “encounters” with the […]

The documentary, which premiered Jan 30th at Sundance 2021, is an 81-minute glimpse of New Yorkers from all walks of life looking for love during the pandemic. Director Pacho Velez calls the subjects of his film searchers (hence the name, duh) and he pulled from over 75 “encounters” with the city’s app users for a candid, intimate study of the modern dating experience.

There’s plenty to dissect in Searchers and a lot of fodder for deeper thought. Maybe you identify with the 27-year-old woman who said every guy she’s met in person from the app has ended up ghosting her. Or maybe you know someone like the 29-year-old man who made a spreadsheet for all his dates and why they ended (one of the reasons is “English not strong enough”). Even if their sentiments aren’t new, some of us will find some solace in knowing we aren’t alone in our frustrating experiences.

But by collecting the stories of so many people across different age, gender, sexual orientation, racial and socioeconomic groups, Searchers also offers insight into what it’s like for someone unlike you. Take the 88-year-old woman who doesn’t want to date anyone older than 60, for example, or the 20-something woman looking for a sugar daddy on Seeking Arrangement. These aren’t tales we might encounter every day, but they present a different take on what it means to find a romantic relationship.

Throughout Searchers, you’ll stare at people’s faces while they go about setting up their dating profiles, swiping on candidates and sending messages to matches. You can sort of see what they’re looking at thanks to a clever translucent overlay on the screen, but the focus is their expressions.

Velez described this setup as a “gallery of desire as viewed through the looking glass,” saying he believed his film “captures many of the challenges underlying online dating apps, including the irony of people disappearing into their devices in search of an IRL partner.”

Indeed, even if these users don’t realize it, how they decide what to do on a dating app reflects their innermost thoughts. They explain to the viewer why they swiped on a person, why they chose a particular word for a message and even how they pick partners. But these decisions expose their innate biases and fears, as well as how dating apps have come to shape the way we think about love.

Ultimately, Searchers is a film about the psychology behind each decision on a dating app. While you watch a woman agonize over the first message to send someone, you’ll realize this is a difficult process for everyone. When you see the 70-something man grumble that “being on Match is a job,” you’ll remember there are other challenges like age, time and expectations you might not have considered.

At some point in Searchers you might even begin to wonder if using dating apps is worth the agony and effort. Velez himself is a subject in the movie and in the second half he goes through an app with his mother, who suggests he try a matchmaker instead.

“So you think that’s the right way to look for love?” Velez asked his mom. She doesn’t respond.

We all want love, and we all want to be loved. When we don’t have it, we go looking for it — whether it’s via apps or matchmakers or asking our friends to set us up. But is there a right way to seek love? Searchers doesn’t answer that question, but Velez said in his director’s statement that he’s hopeful “that a meaningful connection is just a swipe away.”

The film doesn’t bother with long-debated questions of whether apps like Tinder, Bumble, Grindr or Hinge have ruined dating. It barely hints at the notion that there are methods besides looking at profiles on your phone or laptop to find someone. But it does get at the question central to the process, whether you use an app, a matchmaker or go to a bar: What are you searching for? And perhaps more importantly, viewers may be forced to ask themselves “Do I know what I’m searching for and why?” That introspection may lead to better self-understanding that could be a crucial step towards truly finding lasting love.

Tue Feb 2 , 2021
Enlarge / The two messages Facebook users will see in this test. On the left, Facebook’s prompt, and on the right, the one required by Apple. Today, Facebook began testing prompts to iPhone and iPad users championing the importance of being tracked by the social network for the benefit of […] 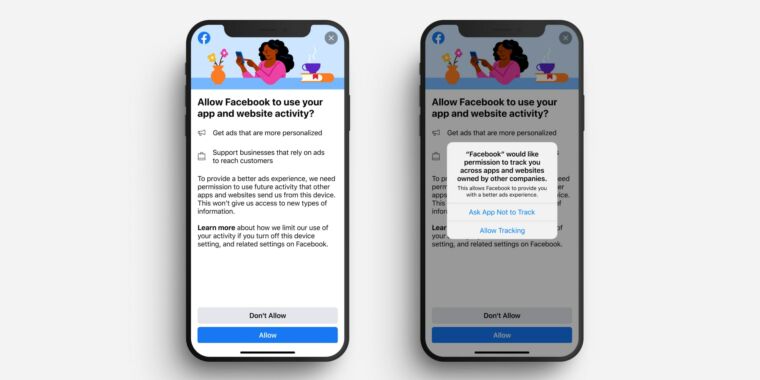