Federal prosecutors got a chance to question suspended Insurance Commissioner Jim Beck about the mysterious Jerry Jordan among other things in his fraud trial.

ATLANTA – Suspended Insurance Commissioner Jim Beck took the witness stand for a second day in his federal fraud trial. Beck told jurors his testimony “is my last chance” to persuade them and the wider world that federal investigators ignored the truth in a misguided rush to indict him.

Beck is accused of being the mastermind in a scheme to steal more than $2.5 million from state-created insurance company Georgia Underwriting Association. Beck managed GUA before he took office as the state’s top insurance regulator in 2019. He was charged with wire fraud, mail fraud, money laundering and tax fraud months after taking office.

After revealing the name of a mysterious computer programmer on the stand on Tuesday during direct examination, it was the prosecution’s opportunity on Wednesday to try to get to the bottom of who the mysterious Jerry Jordan is.

Jim Beck took the stand on Tuesday in what is expected to be the first of two days of testimony from the suspended insurance commissioner.

Beck told the court that he couldn’t find Jordan, a man who he called a key witness and could explain the large sums of cash exchanged hands between Beck and his cousin, Matthew Barfield. Barfield testified last week that, at Beck’s direction, he set up his set up a company to bill GUA for home inspections. He told the jury that he thought Beck’s company Creative Consulting did the actual inspections, he only did paperwork.

Beck testified on Tuesday a separate company he controlled did legitimate extra work for GUA and told the jury he paid a computer programmer he had met at a restaurant named Jerry Jordan large quantities of cash to write software programs to skim home inspection data from public databases.

He said he initially paid Jordan $40,000 in cash. He said, later, he personally, manually entered the data Jordan collected into GUA computers for about three years.

After five days of testimony from some 20 witnesses the prosecution has rested in its fraud and money laundering case against suspended Insurance Commissioner Jim Beck. Prosecutors contend Beck secretly stole millions from a company he ran before he was elected. The state created insurance company is called GUA. Two former GUA board chairmen testified they had no idea Beck hired family and friends to do work or just submit bills to GUA then turned around and took a large cut of the money – much of it in cash.

Beck told the jury that he got the go-ahead from the then-board chairman of GUA, John Houser, to create a company to do home inspection research for GUA. But earlier in the trial, Houser testified he knew nothing about any of Beck’s companies.

The suspended insurance commissioner had no comment about Jordan’s identity other than to tell the FOX 5 I-Team, “Y’all have a nice day,” as he entered the federal courthouse for his second day of testimony.

During that testimony, Jerry Jordan’s name kept popping up. Beck said Jordan had provided the computer brainpower to gather data that GUA used to charge customers more and cut the costs the property insurer of last resort paid others to share in its risks. Those steps, Beck testified, help transform the state-chartered insurer from a chronic money-loser to a profitable entity.

“The government’s theory of the case is predicated on there being a harm,” Beck said. “In reality, there was a benefit. So I would suggest to you, if there is no harm, there is no crime.”

Cousin of Jim Beck says he stands by him

But Beck admitted he didn’t know where Jordan was, didn’t know the proper name of Jordan’s company, didn’t have a written contract with Jordan, didn’t have the laptop computer Beck said Jordan provided him, didn’t even have a Jordan business card. Beck said he lost track of Jordan after he moved “out West” to pursue a woman he met online. He said he and his legal team has searched for two years, but couldn’t find him.

“He is the secret behind both Green Tech and Paperless,” Gray said, naming the two companies prosecutors say Beck invented to embezzle money from his employer.

Beck also testified that he paid Jordan in cash he had accumulated and stored in a safety deposit box and at home, explaining why GUA-linked payments from Green Technology Services and Paperless Solutions never left his bank accounts.

“I agree with you it’s bizarre, but at the end of the day I was paid to do the work and the work was done,” Beck said of the cash payments he said he made.

A long-time friend of suspended Georgia Insurance Commissioner Jim Beck testified he lied to him. The McKaig were close friends with Beck until they got a look at the evidence that federal investigators had gathered against Beck. Then the friendship ended with the McKaigs saying they learned he was embezzling.

Beck admitted on cross-examination he had no evidence of any work he did with Jerry Jordan. No laptop, jump drive, emails, or files. Beck said it is because the business was operating years ago and he didn’t keep it.

Beck argued that the basic flaw in the case is that FBI agents concluded that “Jerry” only referred to Jerry Luquire of Columbus — Beck’s fellow Christian Coalition activist who died in 2014 — instead of believing there could have been another Jerry. Beck testified that he met Jordan after Luquire bumped into Jordan in a restaurant and introduced him to Beck.

The fraud and money laundering trial got under way on Tuesday in federal court. Jim Beck is accused of defrauding a company he worked with of more than $2 million prior to being elected.

Gray focused, in the end, not on Beck’s supposed relationship with Jordan, but on emails that Beck wrote posing as Matt Barfield, the man who prepared the invoices for Green Technology Services, which collected payments from GUA and a husband-and-wife set of contractors to GUA.

“We’re talking about whether you tell the truth,” Gray said, in questioning why Beck wrote emails signing his name as “Matt,” with “Matt” even at one point including Beck in correspondence.

“It did not bother me because I was conducting business on a domain names I owned and emails I owned,” Beck said.

Gray drilled Beck on why he never told GUA employees or some of his contractors that he had a financial interest in the work. Beck testified he got more than 10% of the money paid by GUA, and in some cases substantially more.

Beck said those friends turned on him and testified for the prosecution because they were intimidated by the federal investigation and jumped to the wrong conclusion.

“People do what people do when the federal government begins knocking on their door, and sometimes they put two and two together and get six,” Beck said.

Gray, during the hours of cross-examination, repeated over and over to the jury, “I guess we’ll have to take your word for it”

Beck at times got testy during his testimony attacking the government, the FBI, saying they got caught up in their own narrative and didn’t take the case far enough and at one point said, “The wheels came off this investigation.” And at one point he looked up at the prosecutor and said, “Mr. Gray, I don’t think you understand the insurance industry.” Gray responded, “I don’t probably think I will ever understand what you’re saying.”

More testimony is expected on Thursday.

The Associated Press contributed to this report

When Americans Dreamed of Kitchen Computers

Thu Jul 22 , 2021
Who is making dinner? This is a question many American families find themselves asking daily. It’s not a new question, either. Generations have debated the delegation of kitchen duties, often touching on class, race, and especially gender. Most frequently, women have taken on home cooking, which often means hard work […] 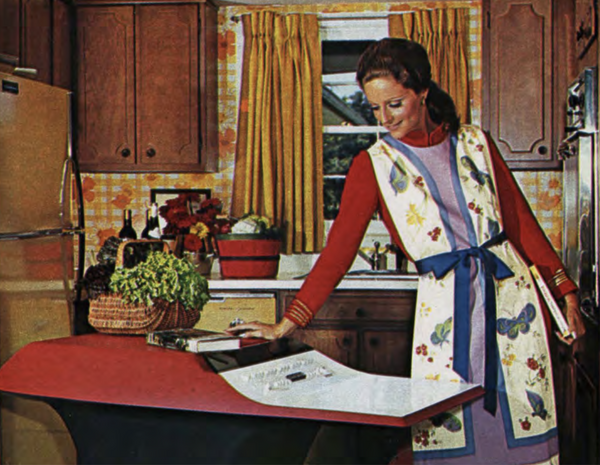