Digital birth control company Natural Cycles wasn’t happy with the news that the Food and Drug Administration cleared a second birth control app at the start of the month. The company, which was the first to get sign-off from the agency, says it’s glad to have the competition — but […]

Digital birth control company Natural Cycles wasn’t happy with the news that the Food and Drug Administration cleared a second birth control app at the start of the month. The company, which was the first to get sign-off from the agency, says it’s glad to have the competition — but it takes issue with the way the FDA gave the new app, made by Clue, the okay.

These sorts of disagreements happen regularly in health care — usually in the back rooms of hospitals where companies jockey to sell their products to providers. For companies, touting the differences between physical medical devices, like surgical screws, infusion pumps, or heart monitors can make a difference in how much of their products they can sell. Now, companies are navigating the same discussions around digital health apps.

Natural Cycles was cleared by the FDA as the first app-based birth control in 2018 — a controversial decision that came after the app was linked to unintended pregnancies in Sweden. It’s a digitized form of a type of pregnancy prevention called fertility awareness, where people monitor their menstrual cycles and other physiological signs to predict the windows when they could become pregnant. People who use this method then avoid sex or use other birth control methods, like condoms, during that time. Natural Cycles predicts these windows using data, including the dates of users’ periods and their body temperature, which changes around ovulation.

The Natural Cycles app is considered a medical device, not a drug, so the FDA didn’t review it in the same way it reviews a hormonal birth control pill. The agency also didn’t consider it a high-risk device, so it didn’t have to go through the most stringent clinical review process, a premarket approval. The FDA signed off on the device using a process called a de novo classification. This pathway is reserved for things that are unlike anything else on the market and the FDA considers low or medium risk. (It doesn’t think it will seriously hurt someone if something goes wrong.)

Like Natural Cycles, Clue isn’t considered a high-risk device, so it also didn’t have to get premarket approval. But it’s not novel: Natural Cycles was already available when Clue came online, so it didn’t have to go through the de novo process either. Instead, the FDA said the Clue app could be sold as a birth control because it was “substantially equivalent” to something that it already cleared.

“Given that the category of ‘software application for contraception’ is already recognized by the FDA, Clue Birth Control and any future contraceptive app that raises similar regulatory questions can be assessed through the standard process for a recognized category,” a Clue spokesperson wrote in an email to The Verge.

It’s always a tricky line to walk, Cortez says. Companies like Clue want to argue that they’re close enough to earlier competitors that they can take the less-intensive clearance pathway. But they also have to market their products as better than competitors. “Companies will say, yeah, this is substantially equivalent to this other product, but it’s better in the following ways,” he says. “It can create some confusion.”

Like Natural Cycles, Clue uses data on users’ menstrual cycles to predict the windows when they’re at the highest chance of becoming pregnant. Unlike Natural Cycles, which asks for temperature data, it doesn’t ask for any other information. That’s the crux of Natural Cycles CEO Berglund’s disagreement with the FDA’s determination that Clue and Natural Cycles are substantially equivalent.

Berglund also says that the algorithm Clue’s app is based on, developed by Georgetown’s Institute for Reproductive Health, wasn’t tested in as large a study as Natural Cycles. The method used by Clue was tested in a study of about 718 women. Natural Cycles’ FDA clearance was based on data from 15,000 women, which was collected by the company itself.

“Most women are not scientists, and maybe won’t read the papers, so I’m slightly concerned that they won’t really be able to tell the difference,” Berglund says.

Clue said in its application to the FDA that it had different characteristics and used different data than Natural Cycles, but argued that the differences don’t affect safety or effectiveness.

“Both are algorithm-based ways of determining the fertile window”

The Natural Cycles algorithm is proprietary, so it’s not possible to directly compare its methods to Clue’s methods. The temperature readings are an identifiable difference between the two, says Rebecca Simmons, a researcher and fertility awareness specialist at the University of Utah who worked on the original algorithm Clue uses. But the temperature is just another piece of data that feeds the algorithm, she says. “Which essentially means that it’s the same — both are algorithm-based ways of determining the fertile window.”

The two fall into the same category, says Nathaniel DeNicola, an OBGYN and chair of telehealth at the American College of Obstetricians and Gynecologists who is not involved with the apps. “The addition of body temperature gives a bit of additional information, but it isn’t a categorical difference,” he says.

Still, he says, that data point could change the way the app makes predictions. “Each thing could add some level of accuracy,” he says. “It gives some more information.” The differences in how the products were evaluated are also important, he says: Clue’s method is based on research done by outside scientists, while the research on Natural Cycles was done by the company itself, which has a vested interest in a good result.

But from a medical standpoint, they’re still both fertility awareness-based methods of birth control. The studies came to fairly similar conclusions about the app’s ability to prevent pregnancy, even though the data is fairly limited. “We’re really dealing with very small numbers of studies,” DeNicola says. He says he’d take the same approach to talking with patients who are interested in using them — focusing on the level of risk of pregnancy someone is comfortable with and the reasons for their interest in an app-based approach. “The main thing we would talk about is if it works for them.”

A back-and-forth over the relative similarities and differences between the two products highlights one criticism of the FDA’s oversight of medical devices — particularly devices it considers low or medium risk. A clinician’s metrics for the things that would make one device similar to another aren’t necessarily the same as the FDA’s. “The FDA definition is not the same definition that any normal human would use,” says Diana Zuckerman, president of the National Center for Health Research.

That’s part of Zuckerman’s concerns around medical devices cleared based on substantial equivalence. They don’t have to go through as rigorous a review process, and the decision is based on how similar two products are, not if the new product is independently safe. That’s worrying if the new device is being compared to a product that’s itself controversial, like Natural Cycles, Zuckerman says. “Even if it is substantially equivalent, how good is the product it’s supposed to be substantially equivalent to?”

It’s particularly concerning for something like a digital birth control, Zuckerman says. Saying that the apps aren’t high risk is a subjective call. The app may not directly harm someone in the way a faulty medication pump could. But pregnancy can be physically dangerous and have major consequences for people who were trying to avoid it. “If the product doesn’t work, there’s a high risk it could be very harmful,” she says.

“There’s a high risk it could be very harmful”

Then there’s the fact that digital health products remain very new. The FDA is still sorting out how it treats apps that it considers substantially equivalent. “You’re going to see in the future different types of algorithms — what if one is a traditional closed machine-learning system, and another is an open one that relies on dramatically different data sources?” Cortez says. The agency also has to navigate software updates, which let digital products change much more easily than a physical device.

Berglund says Natural Cycles reached out to the FDA with questions but hasn’t heard back yet. “We don’t necessarily expect that they will drop everything for this topic, but we’re looking into it,” she says.

The FDA does not take company disagreements about equivalence into account during its decision-making process, an agency spokesperson told The Verge. Tech companies can submit a citizen’s petition if they want to voice their disagreement with an FDA decision, just like anyone else.

“It’s an industry that likes to claim that everything is new and novel and unprecedented, so it’s kind of funny to see this old gray-haired regulator saying yeah, you guys are basically the same,” Cortez says.

Wed Mar 17 , 2021
The Galaxy A52. It’s water-resistant. The front. Samsung The back. Samsung The A52 camera loadout. Samsung It comes in a variety of colors (the A52 and A72 are identical-looking). Samsung Samsung might be the world’s most popular phone manufacturer, but that doesn’t mean its best phone, the Galaxy S series, […] 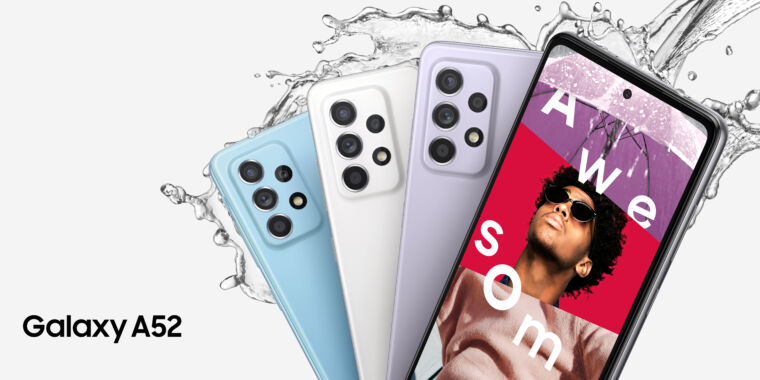