Though iOS 14 has been out since last fall, Apple continues to add new features to its mobile software. The next update — iOS 14.5 — currently sits in beta form. Apple already seeded this beta to developers, giving them a strict timeline on implementing the new app tracking transparency […]

Though iOS 14 has been out since last fall, Apple continues to add new features to its mobile software. The next update — iOS 14.5 — currently sits in beta form. Apple already seeded this beta to developers, giving them a strict timeline on implementing the new app tracking transparency requirements into their apps. A public beta of iOS 14.5 is out now, too.

Privacy transparency highlights the upcoming release, but we’ve found more iOS 14.5 features worth noting. Among these, Apple added a way to use Face ID to unlock your iPhone while wearing a mask. This workaround uses the Apple Watch to biometrically authenticate you.

We expect lots of users will update to iOS 14.5 once it’s final. Apple recently shared that iOS 14 is installed on 80% of all active iPhones and on 86% of iPhones introduced in the last four years.

We’ve dug through the iOS 14.5 beta to find the most important additions, but this isn’t a final list. It’s also possible that Apple will continue to add or tweak features before the final iOS 14.5 release in a few weeks.

You can now download iOS 14.5 as a public beta, which means that a formal release date should be coming soon. If you want to try the beta out, we would recommend that you do so on a secondary device.  We expect the final version of iOS 14.5 to release sometime this month.

Unlock with Apple Watch with iOS 14.5

We all learned the shortcomings of Face ID when the COVID-19 pandemic hit. Face masks befuddled the Face ID sensors, meaning that for the last year or so, we’ve had to manually unlock our iPhones. Thankfully, Apple has found a workaround, though it has one big caveat: you need an Apple Watch.

Unlock with Apple Watch is exactly what it sounds like. Using Apple’s wearable, you can bypass Face ID to unlock your iPhone. It requires that both devices be in very close proximity to each other, otherwise you will need to unlock the phone manually. The Apple Watch must also be unlocked for this to work.

Once you have iOS 14.5 and watchOS 7.4, you can head into Settings under Face ID and passcode. Bear in mind that you cannot use Unlock with Apple Watch to authenticate Apple Pay or App Store purchases. These will still require your face or passcode.

iOS 14.5 adds new app tracking transparency policies, a major change Apple has been planning to roll out since it first announced iOS last summer. App developers, like Facebook, will need to ask your permission in order to access your advertising ID. That ID allows them to track you across apps and websites.

Some of these privacy features already exists in iOS 14, but 14.5 serves as the deadline for app developers to implement the new policy before the apps are removed from the App Store.

When everything is live, you’ll get a new pop-up asking if you want to let the app track you. Apple once again aims for pure simplicity. It’s a huge step forward for privacy and one we’re excited to see come to fruition.

In iOS 14.5, Apple Maps is set to copy a popular key feature from Waze. It will use real drivers to crowdsource road accidents, speed traps, and other traffic hazards, just like its main competitors can. There will be a dedicated button in Maps to report something, available both on the phone and in CarPlay — simple, but effective.

When you ask Siri to play a song, it can open on whatever app you set, including Spotify. This means that you no longer have to specify which app you want the song to play in. Siri will just use whichever one you’ve set as default.

While both the PS5 and Xbox Series X remain in short supply, you can still get your hands on one of the new controllers easily enough. If you have one, either a PlayStation 5 DualSense or Xbox Series X|S controller, you’ll be able to pair it with your iPhone in iOS 14.5.

iOS 14.5 enables AirPlay 2 support for Apple Fitness Plus, meaning that you can cast your workouts to any AirPlay 2-compatible display.

Be aware that Apple Watch metrics will not appear on the larger screen. You will need to view these data points on your iPhone or iPad.

Dual-SIM iPhone users can use 5G globally on iOS 14.5 with the iPhone 12 series. Dual-SIM means that you can have two separate lines of service on one device. This is great for people who keep their work and personal lines separate, or for international travel.

When iOS 14.5 lands, both SIMs will have access to full 5G speeds.

There’s a lot more that we didn’t cover here, but this update will include plenty of tweaks and new additions. Apple plans to make this release a big one and we’re excited for it to hit our iPhones and iPads.

If you don’t want to wait for the finished version of iOS 14.5, you can get the public beta right now, provided you sign up for Apple’s beta program. It’s easy — just head to the Apple beta page in a browser on the device you wish to install the beta on. From there, you enroll your iPhone in the program, using your Apple ID to sign in. Then, you follow the on-screen instructions for downloading a beta profile and installing it on your phone.

One usual word of caution — while the iOS 14.5 beta is fairly stable, it’s still a beta, meaning that problems can crop up. If you rely heavily on your phone during the day, you may not want to subject it to the vagaries of beta software. If that’s the case, hold out until the finished version of iOS 14.5 comes out.

A quantum internet is closer to reality, thanks to this switch

Wed Mar 3 , 2021
Using a programmable wavelength-selective switch can help increase the number of users in a quantum network without increasing photon loss from the switching device, a new study shows. Credit: Purdue University image/Navin Lingaraju When quantum computers become more powerful and widespread, they will need a robust quantum internet to communicate. […] 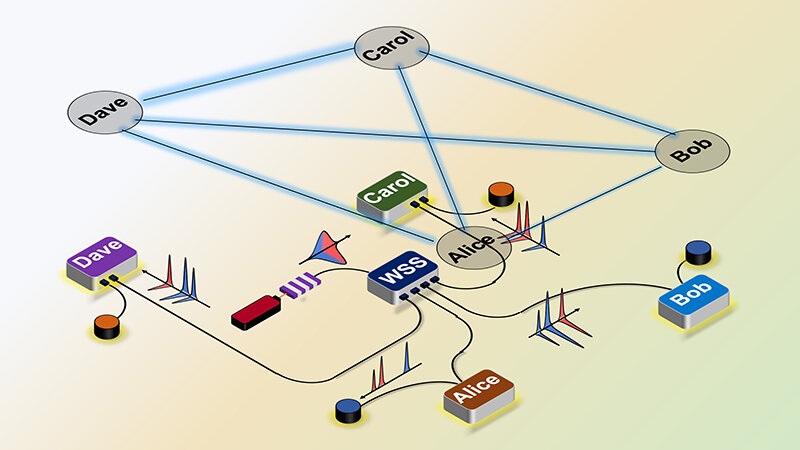